skip to main | skip to sidebar

The Great Wall Of China 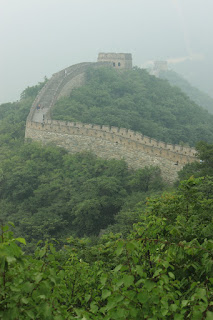 I once commented that a new office refurbishment was like the Great Wall of China; completely negating the open plan concept by erecting three meeting rooms where none had been previously.

It was only when I saw the Great Wall on holiday three weeks ago that I realised how significant that comment was.
For me the Great Wall is a symbol of protection and strength. It was an exhilarating and awe inspiring moment - stepping onto the Wall in the morning heat and humidity and seeing the serpentine wall slither across the green and moist landscape disappearing into the mists of time and space.

Whilst walking on the wall I was thinking back to my comment made some time in 2004 and the temerity I showed in expressing my views on something in which the organisation had clearly taken pride and a sense of achievement. For me, it was blindly obvious that the new offices not only had a physical presence but more importantly a symbolic meaning. It spoke volumes about a siege and protectionist mentality which had seemingly escaped the attention of the Board. A personal epiphany on the Great Wall led me to ponder further the culture and mindset of the people who had started on their long journey of building the wall.

My fellow companions on the trek mused that many must have given up their lives to complete the Wall. The personal sacrifice and hard work put in by ordinary men and the impact it must have had on their families. I felt both sad and amazed and strangely linked in to the lives of those ancient Chinese folk; the small fireplaces in the towers suggested the cold winters the Watchkeepers must have experienced. Suddenly a trip to an ancient Chinese wonder of the world became very real.

So going back to my experience in the corporate world. We sometimes get lost in our goals and actions to achieve one outcome that we inadvertently create another. In an attempt to be more open, the Board actually became more remote and hemmed in. The symbolism of the offices spoke volumes to the folk who worked there: keep out, only the special may enter.

Organisations should be as vigiliant as the Watchkeepers on the Great Wall and take care not to create symbols that become more powerful than the goals they are looking to achieve.

The Great Wall of China remains a symbol of the past and has powerful qualities that evoke a long forgotten era. Symbolic meaning to me is more powerful than an empty gesture - it remains in the collective psyche for a long time and even when the events themselves have long ceased to have meaning the symbols still remain.
Posted by Unknown at 12:53